Mykola Slivotsky – his case is notable for two features common to most prisoners in Ukraine:

1) This is inhuman conditions of detention.
2) This is torture, with the help of which police officers force the arrested to confess to crimes that they did not commit.

Nikolay Slivotsky – at the time of his arrest he worked as a tractor driver, he lived in the city of Voznesensk, Mykolaiv Oblast (Ukraine). After the arrest, Nikolai spent 120 days in cell 2 by 3 m. This cell was designed for 4 people, but at the same time it contained from 8 to 12 people. 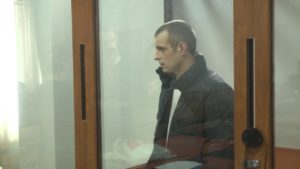 The police officers of this temporary detention unit did not give the arrested people food and did not allow them to meet with lawyers and their parents. A toilet function was performed by a 40 liter plastic barrel.

In such conditions, the tractor driver Nikolai Slivotsky spent more than 120 days. Police officers tortured Nikolai Slivotsky. With the help of torture, police officers forced Nikolai to confess to a crime that he did not commit. Due to torture, Nikolai was forced to take the blame on him for the murder of Vera Krishtal and citizen Grachev. Forcing arrested persons to admit a crime of which they did not commit, police officers of the Nikolaev area increased the indicators of detection of crimes.

Later it turned out that Vera Krishtal was killed by Tabarovsky maniac Sergei Kravchenko. But despite the fact that the crime was committed by another person – by a real criminal, and this was established in court, the tractor driver from Voznesensk Nikolai Slivotsky continues to serve his sentence, for the crime he did not commit.