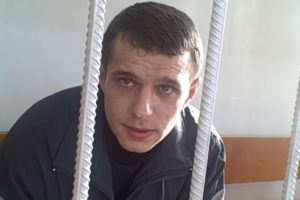 Mykola Slyvotsky has spent 16 years in prison for two murders that he is adamant he did not commit.  There is literally no evidence against him, but the confession which he says he signed after the ‘investigators’ not only tortured him, but threatened that they would do the same to his mother and wife.  Instead of evidence against Slyvotsky, there is the confession of another man to one of the murders, in which the clothing that the victim was wearing and the method by which she was killed are accurately described, as was the exact scene of the crime.

Ukraine’s legislation is already on collision course with the European Court of Human Rights because life sentences give virtually no chance of ever being released.  If that is harsher than most European countries for those who have committed grave crimes, it is impossible to imagine how unendurable it must be for those who are innocent.

Slyvotsky is one of a number of life prisoners whose convictions warrant serious scrutiny.  Questions arise not only because of the alleged methods used to extract his ‘confession’, but because of the failure to obtain other evidence, including DNA, which would have either corroborated or contradicted the prosecution’s case against Slyovtsky.

Mykola Slyvotsky is from Voznesensk in the Mykolaiv oblast.  In Autumn 2003, two women from the area, both in their fifties, were murdered. A man had been arrested and had admitted to the first murder, that of 54-year-old Vera Krysztal. This person, Serhiy Kravchenko was in detention when the second murder took place, that of 56-year-old Valentina Hrachova.

In November 2003, Slyvotsky had just turned 22, but was already married and the father of a five-month-old baby girl.  He himself was working as a tractor driver, but his stepfather had a managerial post in a road transport registration and examination department.  According to Slyvotsky, his mother and Oleh Veremiyenko,  his lawyer and a human rights activist, it was the stepfather’s fairly lucrative post that was to be so fatal for the young man.

Slyvotsky was detained by two police officers in the evening of 3 November 2003 in connection with Hrachova’s murder.

Slyvotsky asserts that they took him to a forest and tortured him, demanding that he ‘confess’ to killing Hrachova.  The torture and beating continued until around 4 a.m. on the following morning.  It ended, Slyvotsky says, when, after having refused to give in to the torture, they threatened that they would bring in his mother and wife and treat them in the same way. He agreed to sign the ‘confession’ they gave him, and was also forced to sign a document saying that he did not need a lawyer.

On 4 November 2003, the Voznesensk City and District Court ordered that he be placed in custody in a SIZO [remand prison] in Mykolaiv.

Despite this ruling, he was, in fact, held for 120 days in a basement cell of the Voznesensk police station, which was designed only as a temporary holding facility. This was a tiny cell (2 by 3 metres) without any proper facilities (no toilet) and only four bunks, although the number of prisoners varied from 8 to 12.

Slyvotsky and his mother both assert that the men who arrested him had tried to get 10 thousand dollars out of the family to drop the case against Slyvotsky.  They, and Veremiyenko believe that he was targeted because the stepfather was seen as having access to money.  This would, of course, explain why Slyvotsky was held in the appalling conditions of the police station and not placed in the SIZO.  It would also explain why, each time Slyvotsky tried to complain to the prosecutor, Timur Volkovsky, he once again faced physical violence either from the police officers holding him in their basement, or by two cellmates.

As mentioned, there had been an earlier murder, that of Vera Krysztal.  A suspect had been charged with her murder and was in custody.  Serhiy Kravchenko already had four convictions to his name, including the first, of the murder of an elderly woman when he was 15.  He had only recently been freed from prison, and Krysztal had testified against him in one of his previous criminal prosecutions.

Kravchenko confessed to the murder, and also gave a detailed, and correct, account, in the presence of his lawyer, of where he had hidden Krysztal’s body, what the woman had been wearing, and how she was killed.  He said that he had thrown her to the ground, and was planning to rape her, but was too drunk.  He asserted that he had killed her as he was scared she would run to the police and report him.

It is unclear even there whether the investigators had bothered to do more than check his testimony against the pathologist’s report, but Kravchenko’s account did tally with the known facts.

Yet Hennady Buts and Timur Volkovsky from the Voznesensk City and District Prosecutor’s Office released Kravchenko and charged Slyvotsky with both crimes, with no evidence to back these charges except Slyvotsky’s confession.

Kravchenko later died in very strange circumstances. He was found in the river in January, wearing only one shoe.  The other was found on the shore – suggesting rather that his body was dragged to the river, than that he jumped in himself.

Veremiyenko has lodged a report alleging crimes committed by the law enforcement bodies against his client.  These include the torture methods used and the attempt to extort 10 thousand dollars from Slyvotsky and his mother.  He asserts that the person used by Volkovsky as the go-between was Mykola Yagodin, who was appointed Slyvotsky’s lawyer though he did not have a lawyer’s licence at the time.

Slyvotsky’s stepfather refused to pay, and Slyvotsky himself ended up sentenced to life imprisonment for both murders.

The Mykolaiv Court of Appeal on 7 May 2019 did allow Slyvotsky’s appeal against the first court’s refusal to review the case on the grounds of new circumstances, with these being that Slyvotsky insists that he gave his confession under torture.  There is, unfortunately, no guarantee that this will result in a real review of the case, and one seems clearly needed.  The following are merely the most obvious grounds for concern:

Gross violations of Slyvotsky’s rights in that he was prevented from having an independent lawyer, and with respect to the conditions he was held in, despite a court ruling;

Although his allegations of torture are denied by the prosecutor’s office and police, there is a photo from 20 February 2004.  Over two months after he had been taken into police custody, you can still see a very pronounced bruise under his left eye. The fact that Slyvotsky’s signature on his ‘confession’ differs so radically from his customary signature is also telling,.  Veremiyenko says that all lawyers can tell you what “tortured handwriting” is like. In fact, any situation where a person has retracted testimony and given details of torture methods requires thorough investigation.

The withdrawal of charges against the first suspect in the murder of Kryszhal, despite Kravchenko’s confession and detailed account of the crime;

The lack of any other evidence against Slyvotsky, besides a confession that he has retracted.   These were crimes committed in 2003, and could, and should, have been backed by proper DNA and other tests.