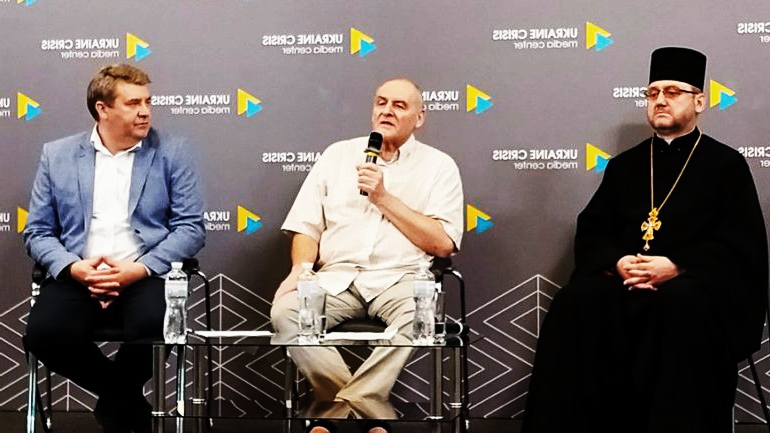 Participants of the event were:

➤ archpriest Oleksa Petriv, representative of the chairman of the AUCCRO

➤ Anatoly Kozachok, first deputy senior bishop of the Ukrainian Church of Christians of the Evangelical Faith

The presentation of the film took place:

For the 24th year, Misyak is serving a life sentence, the cancellation of which lawyers are seeking in the courts for the sixth year, and without a single chance of release.

As the participants of the round table noted, the unresolved problem of the state of human rights protection by Ukrainian courts in general and the right to a fair trial in criminal proceedings, in particular, has been acute in Ukraine for many years. However, it is quite rare to mention victims of justice whose rights have been violated by this unfair system.

According to Andriy Didenko, program coordinator of the Kharkiv Human Rights group, we are used to being justly outraged by the arbitrary detention of Ukrainians in Russia and in the temporarily occupied territories of Ukraine. We are used to considering the Russian judicial system and pseudo-courts of pseudo-Republics dependent and repressive. We are used to the fact that the aggressor can take hostage any of the holders of a passport with a trident for nothing. However, we do not notice that in Ukraine any of us can be sentenced to a long or life sentence for crimes that we did not commit. And, unlike in Russia, there will be no chance to review the unfair life sentence. Even if the convict’s innocence is obvious.

For a long time, the Kharkiv Human Rights Group has insisted on the need to review final sentences in cases of people sentenced to life imprisonment, in which the charge was based solely on confessions obtained as a result of torture, other human rights violations, in particular, the right to refuse to give evidence or explanations about themselves, family members or close relatives, the right to defense, etc. The website Fight for life § Arbitrarily sentenced to life imprisonment in Ukraine (khpg.org) presented the stories of such arbitrarily convicted persons

The Kharkiv Human Rights Group notes that the problem is that since 2010, no mechanisms or procedures have been in place in Ukraine to review a criminal case in which an unfair/ erroneous/ arbitrary/ illegal sentence has been passed.

In order to correct this situation, draft Law No. 2107 was registered in 2015, which would grant the Verkhovna Rada Commissioner for human rights the right to apply, like the Polish Ombudsman, to the Supreme Court for a review of a final court decision. However, there were time limits in the text of the bill that leveled the very idea of revision.

In the same year, 2015, the first reading of the draft law No. 2033a was held, which provided for a temporary mechanism for reviewing the cases of those “lifers” who were considered under the 1960 code in a clearly flawed procedure, that is, in courts of only two instances. But over the next 3.5 years of work, the Parliament of the last convocation did not bother to consider the bill prepared for the second reading. And the relevant committee of the Verkhovna Rada of the current convocation removed it from consideration as irrelevant.

In 2020, a new draft law, No. 3078, was introduced, which aimed to restore the right to a fair sentence for life convicts under the old code and took into account comments to the previous draft law. But it was also withdrawn from consideration.

“The problem of innocent convicts in Ukraine has not been solved for 11 years. During this time, many of them died in anticipation of justice, such as Alexander Rafalsky, in whose case the ECHR recently recognized human rights violations (as established in the ECHR, during his detention in 2001, Rafalsky was beaten, strangled and electrocuted to get a confession of organizing and participating in the murder of five people). Andriy Soroka, Viktor Shchetka, Stepan Chernak and many others also died in captivity, without waiting for justice. We don’t even know the names of many innocent convicts and will never know their terrible stories again,” the Kharkiv Human Rights Group said in a statement.

The All-Ukrainian Council of Churches and Religious Organizations (AUCCRO) could not stay away from such a phenomenon, which results in crippled destinies and lives of innocent citizens. That is why the AUCCRO made a public appeal to the president of Ukraine, as a guarantor of compliance with the Constitution of Ukraine, human and civil rights and freedoms, and to the Verkhovna Rada of Ukraine, as the only legislative body, with a request to immediately stop the worst of the manifestations of lawlessness.

During the meeting with the G7 diplomats, in order to update the problem at the highest level, representatives of the AUCCRO introduced foreign diplomats to the problems of innocent convicts and stressed the need for concrete changes to review the Court decisions, the fairness and impartiality of which have reasonable doubts.

Together with human rights defenders, the following legal solutions have been proposed to date:

1. Improve the presidential pardon mechanism. In particular, to review the procedure for granting pardons, restore and activate the work of the commission on pardons under the president of Ukraine, give it the authority to make extra-procedural political decisions that would stop arbitrariness and injustice against innocent convicts and correct the situation through the pardoning procedure.

2. Expand the powers of the Verkhovna Rada Commissioner for human rights to respond to violations of the right to a fair trial and increase the level of protection of the rights and freedoms of convicts that were violated during pre-trial or judicial proceedings. In particular, to grant the Ombudsman the right to apply to the Supreme Court with an application for review of a court decision that has entered into legal force, in exceptional circumstances (following the example of Poland).

3. Return to the Supreme Court the right to review final court decisions on exceptional grounds – on the grounds of a significant violation of the requirements of the Criminal Procedure Law, violation of the procedure, incorrect application of the criminal law.