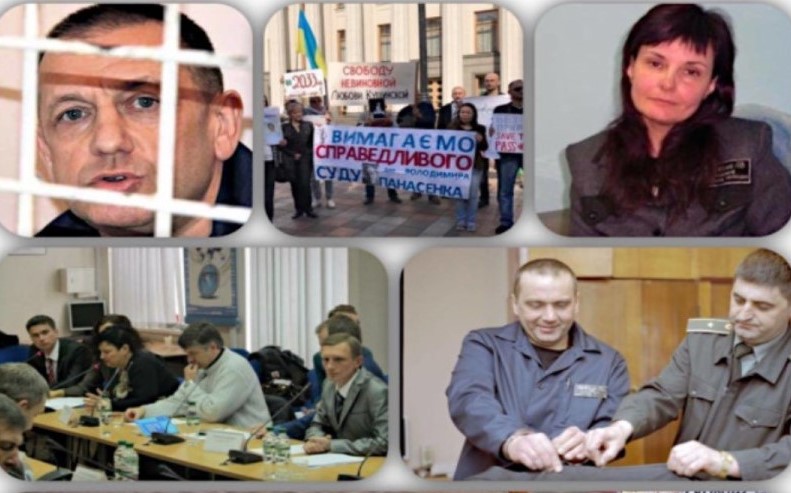 <h3>An earlier protest calling for a draft bill (then 2033a) to give life prisoners the chance of justice. Top left corner is Volodymyr Panasenko</h3>

Ukraine’s Constitutional Court has found the current system depriving life prisoners of any chance of release to be unconstitutional. The move is in keeping with European Court of Human Rights judgements, and is particularly important since there is currently no legal mechanism in Ukraine for reviewing cases where the life sentence was very likely a miscarriage of justice.

The judgement is long and complicated, but essentially finds two articles of the Criminal Code (Articles 81 § 1 and 82 § 1 to be unconstitutional “in that they make it impossible to apply them in the case of people sentenced to life imprisonment”. The Court has obliged Ukraine’s Verkhovna Rada to bring the two articles of the Criminal Code into keeping with its judgement. Constitutional Court judgements are not subject to appeal, so something really does now need to be done.

This judgement is at least two years late. On 12 March 2019, in the case of Petukhov v. Ukraine, , the European Court of Human Rights [ECHR] found that Ukraine was in violation of several rights protected by the European Convention. It held unanimously that there had been a violation of Article 3 (the prohibition of torture) specifically on account of Petukhov’s irreducible life sentence. The Court pointed to a systematic problem regarding life prisoners and even set out a solution. “For the proper execution of the present judgment the respondent State would be required to put in place a reform of the system of review of whole-life sentences. The mechanism of such a review should guarantee the examination in every particular case of whether continued detention is justified on legitimate penological grounds and should enable whole-life prisoners to foresee, with some degree of precision, what they must do to be considered for release and under what conditions, in accordance with the standards developed in the Court’s case-law.”

This was ignored, as was the Court’s Factsheet from January 2020 which clearly stipulated that Article 3 requires at least the possibility that a life sentence can be reduced, ECHR was careful to stress that they are not saying that all prisoners must eventually be released, but such a mechanism much exist.

On 10 December 2020, ECHR published the Case of Lopata and Others v. Ukraine which reiterated that Ukraine was in violation of the prohibition of torture, and did so in bulk. The 24 applicants included Volodymyr Panasenko, who has spent 16 years in prison for a crime nobody believes that he committed.

Panasenko was represented in Strasbourg by lawyer Vadim Chovhan. Following the Constitutional Court [CCU] judgement on 16 September 2021, Chovhan explained how the judgement had come about. In 2017, when it became possible for individuals to directly apply to CCU, he and Tetyana Panasenko (a fellow lawyer and Volodymyr Panasenko’s daughter) “successfully lost” a district court suit and its appeal, with the lost cases required in order to take the issue to the Constitutional Court.

Their application to CCU specifically challenged the lack of any possibility of release in the Criminal Code. The Court, however, refused to initiate proceedings, with the formal pretext, Chovhan explains, being that you can’t challenge what does not exist.

Chovhan’s response was brilliant. He posted instructions on the Kharkiv Human Rights Group website on how to challenge life sentences at the Constitutional Court, providing all the necessary procedural documents. He circulated the instructions as widely as possible in the hope that there would be a wave of such applications – and there was.

He believes there were several dozen applications, all of them probably copy-pasted from his original. In the vast majority of cases, they too were turned down, but not all, and we now have the result in the 16 September 2021 CCU Judge